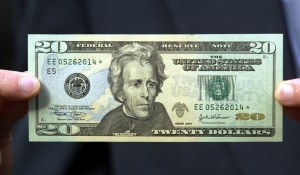 Here’s a simple way to illustrate a common misconception about “tax cuts” and/or “tax hikes.” This will work well at bars, cocktail parties, and really in pretty much any casual environment. Challenge a liberal (or someone else who doesn’t understand economics) with the fact that raising taxes will not help our current situation and add that you can prove it. Make sure that you either have or can borrow a twenty dollar bill for your demonstration. Some other bills can add a little flair but all you really need is the twenty.

First, ask a simple question. “In order to help us out of this mess does the government need more money?” (They really don’t but play along like spending doesn’t matter). When they say “yes” lay out the premise:

Each dollar that you give them will represent 1% of the total economy (i.e. a five dollar bill would represent 5% of GDP, a fifty would represent 50% of GDP, and a hundred dollar bill would represent the whole thing). Tell them that the current top tax rate on the rich is 35% and ask them to name the rate they think it should be. Once they name a rate, fumble around in your pocket or wallet a little bit and then hand them the twenty. Pause for a minute, ask for your twenty back and ask them if they would like to try a different top tax rate. No matter what rate they name, hand them back the twenty. If you like, for a little drama, you can fumble around with some other bills or give different denominations but always hand them twenty dollars. After a few tries they will get the idea that they will always get the twenty no matter what they say. 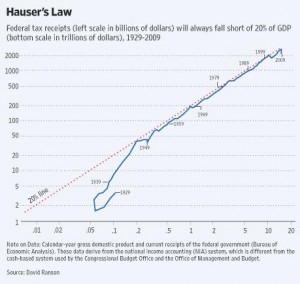 As tax rates rise, businesses and investors react. They slow their activity, delay taking income, stop investing and expansion, or move operations out of the country. Even with a higher rate, there are a lower number of taxpayers so revenues hit a ceiling. This slowing of business activity also affects unemployment (see August 24th post, http://chronicleofchange.com/?p=223).

The only way to bring significantly more money to the government is to increase the number of taxpayers (increase the GDP). The only relevant questions regarding tax rates should be:

1. At these levels do they encourage growth?

2. At these levels are they competitive with other countries?

The revenues which might be gained by tax increases of any kind are capped by economic law and, in our current situation, would not begin to touch the massive deficits we are facing. The problem is spending, plain and simple. With a built in 8% annual increase in spending every year plus overspending on that by 40% every year the country is now in the express lane to financial hell. It’s time to take the foot off the gas and apply some serious braking.