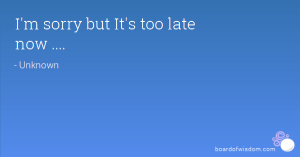 Two stories are in the news today that should evoke the same response from average everyday Americans…… “Sorry, too late now.”

The first story has to do with Target and their stance on transgender bathrooms. If you remember, they instituted their transgender bathroom policy in April. The people weighed in with their opinion. Since then their stock price has dropped severely, resulting in a loss in value of the company reaching as much as $11 billion. The losses have recently moderated a bit to only near $10 billion. Yesterday they reported sales down roughly 10% and foot traffic down for the first time in a year and a half. At the same time they announced that now they are spending $20 million to install single-stall restrooms to accommodate however many of the one-third of one percent of their customers who are transgender and want to use the opposite bathroom of their physical gender. Amazing how a loss of $10 billion or so and a slap down from their customers can change things.

Sorry Target. Too late. I suggest that those of us who have learned to “aim away from the Target” continue to do so until they go away. Any corporation (or any entity for that matter) that shows that it is willing to ignore the safety of children to send a political message needs to receive a return message….. good and hard.

The second story has to do with the Clinton Crime Foundation. The largest slush fund in the history of the world announced yesterday that they promise not to accept donations from foreign entities if Hillary is elected. They must think the American people are a special kind of stupid. Hello? Her influence has already been bought. Foreign interests and corporations already own her. Swearing off future “donations” has absolutely no effect on the debt she already owes to them.

Sorry Hillary. Not buying it. It’s too late. You have already been purchased and you can’t undo that by saying you won’t be bought again in the future. That would be like Bernie Madoff saying he promises not to scam investors in the future if they’ll just give him more money.