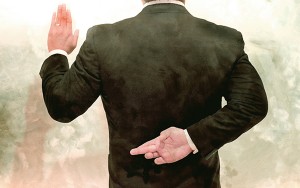 As we head for the debates and the home stretch of the 2012 elections, here’s a quick look at my top ten lies you are likely to hear most often.

“Chrysler” no longer exists except as a nameplate for Fiat. Whatever valuable assets they had (which weren’t many) were just sold, name included. GM is still on a path of failure and their bailout is likely to cost taxpayers $35 billion. Ford did not take one dime and is just fine. Likewise for BMW, Volvo, Hyundai, Toyota, Honda and all other auto makers who build in the U.S. A conventional bankruptcy would have accomplished the same thing, just without handing over ownership of GM to the unions while seizing the assets of private investors. Oh, wait a minute….. maybe that was the point.

2. There is an economic “recovery” under way; just a slow one.

There is $2 trillion in corporate cash sitting on the sidelines. No one is investing, no one is hiring, and no one is going to make a move with the Obamacare booby trap ready to activate in 2014 on top of the already venomous anti-business climate created by Washington.

3. The economic “crisis” inherited by President Obama was caused by a lack of regulation.

The housing collapse (and the ensuing crisis) is directly connected to liberal government policies and overregulation which forced banks to give mortgages to people who everyone knew could not pay them back. (Turning point: Bill Clinton’s Attorney General, Janet Reno, threatening banks with legal action if they did not meet “quotas”). On top of that, Democrats knew about the problems, were warned in 2004, and disregarded the warnings for political reasons. You can see that here on C-SPAN:  http://youtu.be/Yga7TlsA-1A

4. Our massive deficit is due to George Bush’s two “unpaid for wars.”

In 2007, with both wars at their height, George Bush posted a deficit of $161 billion. This year’s deficit is nearly TEN times that! In his first 60 days, President Obama added enough debt to run both wars for seven years and ended his first year with a deficit roughly three times Bush’s worst year. Current deficits include the revenue for Obamacare but not the cost of services provided (that begins next year). The price tag for Obamacare was supposed to be roughly $800 billion. By the government’s own statistics, that price tag has more than tripled since and it hasn’t even gone into effect yet. President Obama will have added more debt in his term than all previous Presidents combined. Our deficit has little to do with funding wars.

5. The “Bush tax cuts” are a major cause of the deficit and must be undone.

First of all, they are not “tax cuts.” They have been the tax rates for nearly 10 years. When instituted in 2003, tax money coming into the government went up to record highs for the next 4 years and every single measurement of economic health went up sharply.

Whenever you hear this take a minute and do some math. It would have taken 150,000 jobs per month every month just to keep up with population growth and college graduations. Whatever number they’re quoting will be more like drowning than “treading water.” This is also, at the very least, disingenuous in that they are telling you about only the jobs created. At the same time jobs are created, jobs are being lost. The only number that matters is the “net” total and that is a number you will not hear them or the lapdog press ever mention.

7. Raising tax rates by any amount will help address the debt.

If the President gets his way on his current proposal for “taxing the rich” the additional revenue would last a total of three or four days. If he could raise the tax rate to 100% (take it all) for everyone making over $200K it would last a few months. And then what? It’s the spending stupid.

This one is outrageous. The 15% refers to the capital gains rate which applies to investments. This money has already been taxed once either as personal or corporate income so this is the second time the same money has been taxed! It is also possible that this investment money could go down in value or be lost entirely. A good response to this one is to ask a liberal if he/she would like the same tax rate on their paycheck if it was possible they could lose it all.

9. Each and every announcement of the unemployment rate.

Whatever number you hear on the evening news is calculated with nearly 60 million unemployed not being counted. The labor force participation rate is near an all-time low. The tens of millions who have given up or stopped looking “do not count” according to the current method. When you hear 8.1% as you did at last report, know that, if we were keeping score the same way it was kept for George Bush, the rate is 11.4%.

10. Any opposition to President Obama is racially motivated.

Nonsense. There are a vast number of legitimate policy reasons why more and more Americans want this President gone…. Obamacare, the debt, sidestepping the Constitution, overregulation, a crippled economy, a shrinking dollar, weak foreign policy, demonization of success……… the list could go on. It is highly more likely that most Americans want him gone because he’s red rather than because he’s black.

And just to throw one in for good measure….

11. The attacks on Sept 11th in Libya were caused by Muslim outrage over a film trailer.

Really? How stupid do they think we are?

Apologies if I happened to miss one of your favorites. This list could’ve easily been a “Top 50.”