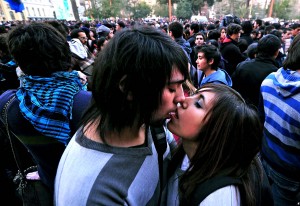 The raging controversy these days seems to be the Sandra Fluke testimony before Congress in which she stated that she simply cannot afford the contraception necessary for her to have the proper amount of sex. She doesn’t just want it to be easily available (and it is). She wants if for free and thinks the American taxpayer should pay for it. Rush Limbaugh once again tweaked the nose of the government media by linking Ms. Fluke to the definition of a “prostitute” (sex for compensation), they jumped at the bait, and the media frenzy switch is now in the “on” position. There are calls and petitions to have Rush removed from the air, leftists everywhere are knocking each other down to get to a microphone, and even President Obama jumped into the fray by calling Ms. Fluke personally.

Let’s just step back for a moment and look at what is really happening here. First of all who is Ms. Fluke? The mainstream media would have you believe that she is the traditional “twenty-something” struggling law student, scratching and clawing her way through school, and getting by on the few meager dollars she can scrape together waiting tables while on summer vacation. Ms. Fluke is actually 30 years old. She is a grown woman. She chose to go back to law school at the age of 30. Not unheard of, but a little unusual. Why, you ask? More on that later, but suffice it to say she is not your typical college student. She is also out of step with most of her classmates at Georgetown.

One of her classmates, Angela Morabito said ” Sandra, we might be on the same campus, but we are not on the same planet.

Sandra told some sob stories about how contraception isn’t covered by the Jesuit institution we attend. (Maybe they don’t cover it because, you know, they’re a Jesuit institution. Religious freedom? Anyone? Bueller?)

A student group called Plan A H*yas for Choice staged a demonstration against the university health plan last year, duct taping their mouths and chaining themselves to the statue of Georgetown’s founder on the university’s front lawn. Then, a funny thing happened – nothing. We left them there. Now Sandra has chained herself to the sinking ship of Pelosi Liberalism. She will always be remembered as a Welfare Condom Queen.”

There are a few other facts about Ms. Fluke you will not see or hear in any of the “Obama re-election media” even though all of this is easily available at Georgetown Law’s website.” She received her undergraduate degree from Cornell University in Policy Analysis & Management, as well as Feminist, Gender, & Sexuality Studies in 2003.  What would that qualify Ms. Fluke to do? Seems to me the logical career choice with this background is political activist.  And so it is.

Also from the Georgetown Law website: “Through Georgetown’s clinic programs, Sandra has proposed legislation based on fact-finding in Kenya (interesting connection there) regarding child trafficking for domestic work, and has represented victims of domestic violence in protection order cases. Sandra is the Development Editor of the Journal of Gender and the Law, and served as the President of Law Students for Reproductive Justice, and the Vice President of the Women’s Legal Alliance.” To sum up, Ms. Fluke has a long history of political activism on behalf of traditional leftist causes.

And here’s a fact you will NEVER see or hear in the mainstream media. In one her first interviews Ms. Fluke is quoted as talking about how she reviewed Georgetown’s insurance policy prior to committing to attend and, seeing that it didn’t cover contraceptive services, she decided to attend with the express purpose of battling this policy. She is attending Georgetown for the very purpose of creating the controversy we are now witnessing.

This entire event was staged. She was asked to testify by Democrat members of Congress only. There were only Democrat members present during her testimony. Even the Huffington Post got it right by posting this: ”Fluke got the stage all to herself and was hailed as a hero by the crowd and Democratic lawmakers on the panel, all of whom rushed to appear on camera with her at the end. “Excuse me. I’d love to get a picture with our star,” Rep. Carolyn Maloney (D-N.Y.) said as she pushed her way through the packed room to Fluke.”

What is the purpose of the Democrats staging this event now? Simple. Obama is in trouble if the country focuses on his record and the condition of the country. He and his propaganda press are trying to distract you from the crushing debt, the disaster of Obamacare, and the bleak future you will face should his destructive policies continue. Enter Susan Fluke and the phony contraception issue. Distraction.

If Rush Limbaugh was not engaged in satire and actually meant Ms. Fluke was a prostitute he would have been over the line. She is, however, a “prostitute” in a different sense. She is prostituting herself to the liberal cause. She is standing in front of the entire country making a complete fool of herself for future gain. She’s a 30 year old grown woman who is paying $23,000 a year in tuition and can’t afford contraception? She can’t figure out that Planned Parenthood (of which she is most likely a supporter) is giving out contraception on every street corner? Kids in 6th grade are being given free condoms and as a 30 year old law student she can’t find one?

What future gain might Ms. Fluke reap for her little stage show? You can bet there will be a political appointment in her future. Maybe even a book. Play ball with the Politburo and you will be rewarded. If you’re just an average Joe on the other hand you should have to pay for sex (someone else’s that is).

As the controversy swirls, remember this was all staged. This was no Fluke.