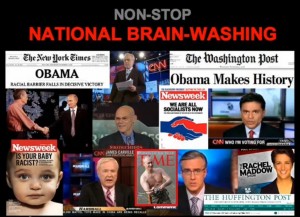 As we approach my favorite holiday, Thanksgiving,  it will take some extra effort this year to put the  focus where it belongs; showing true gratitude for  that which God has given us. There are more  distractions than the usual bombardment of sales  and Black Friday events. This year, our own  government is urging its citizens to turn into  Obamacare sales reps at Thanksgiving dinner. The  full-blown propaganda machine is swinging into  high gear. OFA (Organizing for America), Obama’s  grass-roots victims-of-hypnotism support group,  is offering tips for the holiday. They include reminding your relatives to bring their social security and salary information along so they can sign up and how to find a nice relaxing time to discuss signing up. They suggest, “family time … downtime after meals or between holiday activities.” Boy, that’s a good way to encourage those family holiday moments. The White House satellite press corps in charge of brainwashing seniors, AARP, is offering e-cards to send to family members urging them to enroll with catchy little lines like “Get health insurance and I’ll admit you’re my favorite child.” Yesterday’s Washington Post has an apologia entitled A Guide to Surviving Obamacare which includes suggestions for handling grandpa who “has concerns about being death-paneled” and your uncle who “brings out his cancellation notice after a few glasses of wine.” In Colorado, one of a series of tasteless adds features a photo of a young attractive couple. As she mugs for the camera holding up her birth control pills the caption below says, “OMG he’s hot. I hope he’s as easy to get as these birth control pills.” At the top of the ad, in large letters, it asks “Got Insurance?” Looked at individually, these appear to be crazy little vignettes which generate a laugh, a head scratch, or perhaps a mild urge to vomit. Collectively, however, they are part of the ongoing daily brainwashing operation emanating from Washington. All of this, together with the continuing faith of cult-like followers who continue to support “Nanny” government no matter what, encouraged a little reading on the subject of brainwashing. And where better to look than to the old Soviet Union for the playbook on that operation?

In 1988, Cogs in the Wheel: The Formation of Soviet Man by Mikhail Heller was published. A review of the day offered the following quotes (followed by comments):

“Nationalization of the means of production by Lenin and the Bolsheviks was a tool for a specific purpose: to control all aspects of the social and economic environment so as to create the conditions necessary to make over human nature and produce a new Soviet or Communist Man.” (In the United States we have recently witnessed the partial or complete nationalization of several industries. The energy industry is being controlled by regulation rather than legislation but it is none the less being controlled. The banking and auto industries are under far more government control than ever before. If not stopped now, the entire health care industry (one sixth of the U.S. economy) will be under government control. It is arguable that the media, Hollywood, and all levels of the education system are now mouthpieces of Washington’s cultural messaging desires).

“But what Lenin and the Bolsheviks found after the Revolution was a Russian people imbued with the same “bourgeois” traits as everyone else: individuals primarily looking out for number one, more interested in improving the economic conditions of their immediate family, reluctant to work except for incentives and rewards for the labor to be performed, and generally disinterested in making sacrifices for a world revolution. To achieve their goal, therefore, Professor Heller explains, the Communist Party proceeded to destroy all the cultural and economic institutional structures that surrounded and protected the Russian people. As the author expresses it, the Soviet authorities began a process to “infantilize” every Russian, i.e., to make every Russian completely dependent upon the Soviet State, and, therefore, moldable in a social cast constructed by the Party elite. No corner in the society would be left in which the individual could hide and protect any personal qualities and characteristics undesigned by the State.” (First and foremost, the Soviets had to break the church. You be the judge of whether you see that happening here or not. They also had to break the family. See that happening? “Infantilizing” every citizen? Just think about if for a minute).

All of this could lead one to ask, “Did Reagan really win the Cold War?” Oh, come on now. The Soviet Union fell apart. There’s a bunch of new countries and Russia’s in trouble themselves. Fair enough, but did communism die? Maybe something else happened. In the famous Chinese essay “The Thirty-Six Stratagems,” ideas are offered to gain advantage in war, politics, and civil interaction. The stratagems include:

Most people believe the great communist threat is dead. Is it really? Most people believe the communist world is in deep trouble. Is it really? Does this mean the communists decided to retreat in a military sense and take over the U.S by deception from the inside without firing a shot? That claim would be a bit fantastic. On the other hand, if they were, how would things be different from what we see today?