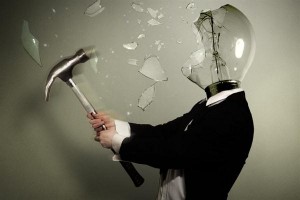 Most of you have felt the force of peer pressure being intentionally used on you at least one time in your younger days. Maybe your classroom was unruly and the teacher canceled recess that day for the whole class even though only a couple of the students were causing the disturbance. Or maybe you were on the basketball team and, due to the mistakes of a few, the whole team had to run extra laps. Or maybe, at home, none of the kids were allowed to go out to play until somebody admitted to breaking the lamp. In each of these situations a larger number of “innocents” were made to suffer some discomfort for the bad behavior of a fewer number of “offenders.” The theory was that, to alleviate the discomfort, the group itself would use peer pressure to bring the few back into line with the acceptable behavior of the group. And it usually worked.

Looking at our current situation with Muslims in the U.S., could this effect be an extra benefit to taking common sense security steps regarding Islamic terrorists? We hear over and over again that the “vast majority” of Muslims are peace-loving people who have nothing to do with terrorist attacks in the U.S.  That is true. The vast majority of your brothers and sisters also did not break the lamp.

We must have the will to enact common sense steps for the protection of all even if it causes some discomfort to a large number of Muslims innocent of any wrongdoing. If necessary security steps make it more difficult to immigrate to the U.S. for Muslims than for others, even if that is unpleasant for the majority of Muslims, so be it. If we need legitimate access to a particular Mosque because we have “reasonable cause” to believe a terrorist attack is being hatched inside so be it. We can make it clear that we do not need access to your Mosque because it is “Muslim,” we need access to your Mosque because it may be hatching a terrorist plot. If it turns out to be nothing, we apologize for the inconvenience and move on. If we name a particular Imam who is preaching “death to Americans” in the press and that creates some discomfort for the members of his Mosque so be it.

That very discomfort may even have a positive effect in the long run. Over and over again we hear that we will never be able to end this threat without the cooperation of the Muslims themselves. If the necessary steps for security inconvenience Muslims more than the rest of us maybe that will motivate them to exert peer pressure on the radicals among them to create change. Maybe there will be fewer of the “terrorist factory” types of Mosques in business. Maybe some of the terrorist inciting Imams will be shunned by the masses. Maybe the millions of Muslims across the world will come up with a few ideas of their own how to rid themselves of their mutated brothers.

And let’s not assume that the Muslims who are innocent of wrongdoing are stupid enough to believe that we hate them all. Even as a 10-year-old you knew that you were being kept inside to force your brother to fess up to breaking the lamp. You knew it wasn’t really about you at all. You knew who did it and so did all your brothers and sisters. The group itself eventually forced the behavior your parents wanted. The millions of innocent Muslims out there know exactly what’s going on.

Political correctness only further enables the innocent majority to continue to do nothing. This irrational fear of offending someone must end for a very simple reason. It costs lives. It may require making Muslims a little uncomfortable to find out who broke the lamp (and who is planning to break more).

Finally, ask yourself, if one of your Christian brothers from a church in Mobile, Alabama was planning a terrorist attack would there be any hesitation in arresting him on the front steps of the church with full cameras rolling?