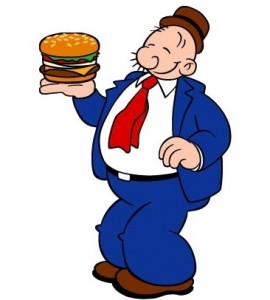 For those of you not old enough to remember, there was a character in the original Popeye cartoons named Wimpy. Wimpy absolutely loved hamburgers but never seemed to have any money. He would periodically show up and say to Popeye “I would gladly pay you Tuesday for a hamburger today.”

President Obama’s Thursday night speech was classic Wimpy. He asked for (more like demanded) a $450 billion “hamburger” and offered to pay for it on “Tuesday.” He promised that it would be 100% paid for. He’s just going to tell the super commission on debt reduction that they will have to find $450 billion more in savings sometime before Christmas (I wonder, is Christmas on a Tuesday this year?) Hey, that was easy. That’s as good as done.

Sorry Mr. President, but we’ve been down this road before. We don’t want another bill similar to Obamacare that, as Nancy Pelosi said, we “have to pass to find out what’s in it.” If you want the hamburger today show us the money today.  Not Tuesday. Not after a commission submits their report (even if they are super). Not Christmas. Today.

It’s very simple. Have someone draft a bill that includes everything. Bring it before our representatives in Congress, they’ll discuss it and take a vote. Disregarding the fact that it sure sounds like “epic fail stimulus redux,” we want to know now exactly what is in it.

No more burgers on credit.