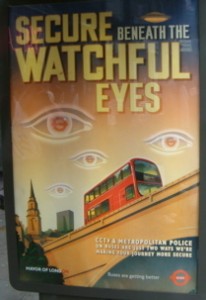 Back in the early ’70’s Sly and the Family Stone recorded a song entitled “Somebody’s Watching You” with an eerie sort of tone and lyrics that reminded you that you are being watched. Here are a couple of “big brother” developments you may have missed that have come to my attention over the last couple of days which reminded me of that old classic song.

The first came about due to a computer problem I was unfortunately saddled with. It was a software issue so my computer itself was not damaged but I was forced to wipe the hard drives clean and reinstall Windows, reinstall all the programs, and reset all the preferences. Not fun at all.

It was in the process of doing this that I discovered an interesting thing. In my newly loaded web browser there was something in my preloaded “Favorites” list that was not there before. There are preloaded links to “Websites for United States.” One is for the English version and one is for the Spanish version and both take you to “USA.gov.” USA.gov has been used as a gateway in the past to tout the administration’s talking points in the sale of first the stimulus (epic fail) and then Obamacare (economic disaster) to the public. Nice to know that our young first-time computer users, and the rest of us for that matter, get a direct link to government propaganda central whether we ask for it or not.

The second development was today’s news stories on the new Obama campaign website “Attackwatch.com” This website has been created to supposedly fight the “smears” and “lies” being circulated about President Obama. They want you to join something call “Attackwire” and report incidents of these “smears” and “lies” so they can respond with their “truth.” One response was classic. One woman asked if this would be available in the original German. According to ABC news another said, “There’s a new Twitter account making President Obama look like a creepy, authoritarian nutjob.” In just one day this has already become a laughing stock across the internet but the concept that the President’s own campaign staff wants American citizens to inform on their neighbors is a bit frightening and distinctly “German” in an unflattering sense of the word. What next? Will teachers be filing online reports that little Johnny shared that his parents said an unflattering thing about President Obama?

If it were not for the fact that I would have to give them my email address to reply (possibly bringing the black SUV’s of the Gibson guitar police to my door) I would love to report a couple of lies and/or smears. How about if we start with this one:

President Obama said, during the negotiations on raising the debt limit, that there might not be funds to send out the next round of Social Security checks if he didn’t get authority to borrow more money.  That, ladies and gentlemen, was a bald-faced whopper of a LIE and he knew it as the words left his lips.

OK. One of you liberals out there do your duty and report that lie.