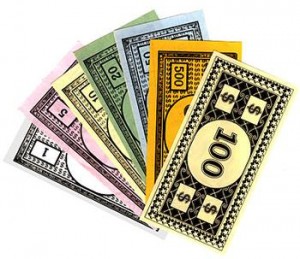 If you have been anywhere near a grocery store or a gas station in the last year or so (and who hasn’t) you might have noticed that things seem to cost more…. a lot more.

If you listen to traditional thinkers you will hear that “high oil prices due to unrest in the Middle East” or that “droughts and floods affecting this years grain crops” are responsible. In reality, the price of oil has been falling and, on Friday, the price of a barrel of oil fell to its lowest point since February of 2010. Why haven’t gas prices changed? According to the US Dept. of Agriculture total world food grain production will be 427 million metric tons more than what is consumed. Have you seen any savings at your local grocery this year? It might be that your food and gas prices are in the same range as usual but every dollar you are paying the bill with is worth a lot less. Let me rephrase that. It is worth a lot less.

When evaluating a currency you have to look at it in relation to something else (i.e. a commodity like gold or the currency of another country). When we look at those other things in relation to each other they are still in what would be considered a normal range. (An ounce of gold will still buy roughly the same amount of grain, Euros, iron ore, or whatever). What’s different is the amount of U.S. dollars it takes to get into that exchange.

Take a look at the value of the U.S. dollar vs. other world currencies since President Obama took office in 2009 (just before the last peak in the gray area on the right): 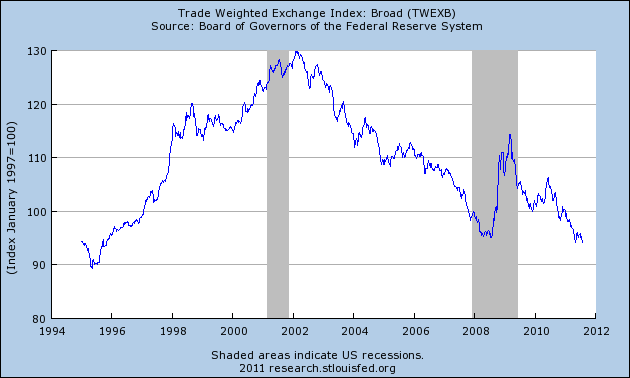 Depending on who you listen to, it’s generally agreed that the dollar has lost somewhere between ten and fifteen percent of its value in the last two years. You can run the numbers yourself. How much does a 10% “dollar-related” increase amount to on $3.50/gal. gas or a $100 grocery bill? How about on an ounce of gold or silver? Hey, the stock market’s going up, right? (Well, at least until last week). Here’s a question; are the values of the companies going up or does it just take a higher number of U.S. dollars to buy the same value as before?

The level of overspending in the last two years has crossed over into an area that can only be labeled as insane. We currently fall $4.2 billion further behind every day. This slow motion suicide has been supported by the printing of money out of thin air (QE1 and QE2). Can you imagine playing Monopoly with someone who owed you and all the other players fantastic sums of money and just strolled on over to his computer and printed up enough to pay everyone? Not only did he just pay you in “money” he didn’t earn, he also diluted the value of everyone else’s  money which they did earn. In this case it is the Federal Reserve Bank printing all the money but that’s a story for another day.

The bottom line is it simply takes 10% more dollars than it did two years ago to buy an equal amount of anything .