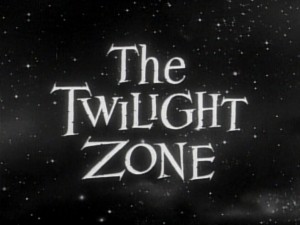 Rod Serling would have to elevate his level of strange writings to match some of today’s reality. His first stop in the Zone might be with Tom Vilsack, Secretary of Agriculture, who said this on Tuesday:

“Later this morning, we’re going have a press conference with Secretary Mavis and Secretary Chu to announce something that’s never happened in this country — something that we think is exciting in terms of job growth. I should point out, when you talk about the SNAP program or the food stamp program, you have to recognize that it’s also an economic stimulus. Every dollar of SNAP benefits generates $1.84 in the economy in terms of economic activity. If people are able to buy a little more in the grocery store, someone has to stock it, package it, shelve it, process it, ship it. All of those are jobs. It’s the most direct stimulus you can get in the economy during these tough times.”

Exciting job growth from food stamps? This is definitely worthy of a Twilight Zone episode. If we get $1.84 benefit to the economy for every dollar we put in why not just give out a trillion or two in food stamps and rescue the economy once and for all?  Did he possibly forget that he had to take that dollar from a taxpayer who could have spent it for his own food?

Further out in the Zone we might find NASA spending your tax dollars along with the dollars of Penn State University to come out with a study analyzing whether or not contact with aliens (ETI) would be harmful or beneficial. I kid you not. Real study. Real dollars. Here’s a few quotes:

“ETI could attack us out of selfishness or out of a more altruistic desire to protect the galaxy from us. We might be a threat to the galaxy just as we are a threat to our home planet…”
It goes on to say that aliens might “seek to preemptively destroy our civilization in order to protect other civilizations from us.” And then there’s this: “Humanity may just now be entering the period in which its rapid civilizational expansion could be detected by an ETI because our expansion is changing the composition of Earth’s atmosphere (e.g. via greenhouse gas emissions), which therefore changes the spectral signature of Earth…”
Really? Global warming is going to force an alien civilization to destroy Earth to protect other civilizations from our evil “carbon footprints?!” This could give a whole new meaning to the term “little green men.” This is the new NASA. Remember when NASA was cutting edge cool? Remember “One small step for man, one giant leap for mankind?” And, by the way, Penn State is the home of Michael Mann, the creator of the now disgraced “hockey stick” temperature graph.
The Zone might also feature the Army Corps of Engineers… The Corps was founded in 1802 by then President Thomas Jefferson. Right after the War of 1812 they began overseeing the nations river systems. Dams and reservoirs were designed and built over the years to prevent the disastrous floods that had long plagued those living near major rivers. In modern times, the environmental movement has gradually become more and more influential on the activities of the Corps as well as producing more destructive results. According to Joe Herring in the American Thinker, “The Corps is dancing to the chanting of American Rivers, the Sierra Club, and numerous other left-of-center environmental lobbying groups, working toward “reconnecting the river to its floodplain.”  According to this green-trendy concept, a slow, meandering river poses no threat — only the channelized “ditch” created by man’s interference is dangerous.” In 2006 environmentalists forced a rewriting of the Master Water Control Manual to “reflect and further their cultural and biodiversity goals of “eco-system restoration.” The agency now spends $73 million a year on fish and wildlife habitat restoration and only $6 million a year on flood control. Well thank you Sierra Club! Mission accomplished. The Missouri River is now “reconnected to its floodplain.” The Missouri is now 11 miles wide in some places after this year’s spring floods. Entire towns are still under water. When asked about why more water wasn’t released sooner to prevent the flooding the Corps’ representative said of the water levels “The way the manual is written, that’s always the target.”
Towns and villages that were there before the construction of the dams have now become a victim of their misuse and “sleep with the fishes.” The system of dams and reservoirs that was constructed to prevent flooding and protect property is now being manipulated in the name of someone’s arbitrary concept of the “natural state” of the river to actually encourage the very flooding it was created to stop.

And of course, no discussion of an alternate reality would be complete without our President…. According to the President himself, the State of California spent $100 million of stimulus money on weatherizing homes. The result? 538 jobs. One hundred million of your tax dollars were used to create 538 “makework”  jobs in a state of 37 million people at a cost of  $185,873.61 per job. Here’s an alternate idea; why not just give deserving individuals a $61,957.00 check? That would help out 1614 people (three times as many) for the same amount.

One of Rod Serling’s favorite plot lines was that of the person who stumbled into a strange situation in the Twilight Zone and could not find his way out. I worry a little more every day that our reality might match Serling’s genius.