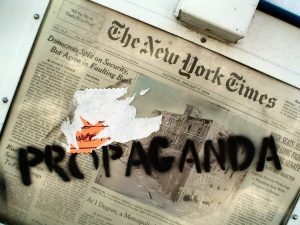 The New York Times reported today that they have discovered further disturbing ties between President Trump and Vladimir Putin:

“Yet another disturbing example of Donald Trump’s ties to Russia has been discovered. Anonymous sources have told the NY Times that they personally know someone who told them that there is a rumor that all of Donald Trump’s hotels serve Russian vodka. This is causing further chaos and possible cases of syphilis in the White House as the President’s staff was in crisis mode already attempting to respond to leaked information from unnamed intelligence officials who released a recording of Donald Trump from 1980. The White House has already admitted that, on the recording, Trump said that the Russian Olympic hockey team was “very good.” As the number of Russian ties to Donald Trump mount it is only a matter of time before he addresses the elephant in the room that is, as yet, only whispered about. Why does his daughter’s name contain within it the Russian name, Ivan? Or, even worse, is Ivanka a Russian name?”

It seems odd to even have to mention it but the satire light was lit for this post. The fact that it might even be conceivable that the once respected NY Times might consider such a thing shows how far the Gray Lady has fallen.