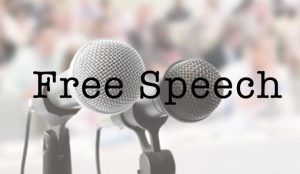 The mainstream media has been calling foul on President Trump calling them out as “fake news.” What about the 1st Amendment? You can’t stifle free speech!! Even Captain Establishment, John McCain, has hinted that free speech was being threatened.

Let’s be clear about the 1st Amendment. Its protections are from government silencing anyone who wishes to speak their mind. It does not, however, end when that person speaks their piece. It continues on for all who wish to reply.

In this case the government is doing nothing to hinder CNN, NBC, and the rest of the leftist propaganda outlets from saying whatever they want. Once they say it, President Trump and the rest of us are just as free to say they are lying as they were to speak the lie.