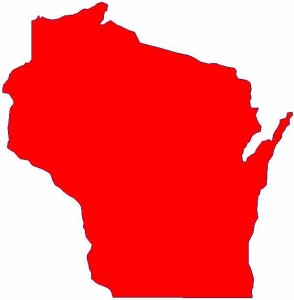 In what was most likely the most spectacular geological and cultural event in history the entire State of Wisconsin mysteriously vanished on Tuesday. World cheese markets panicked (cheddar closed at $350/ounce) and scientists voiced concerns that all that snow and ice will eventually have to relocate to other warmer climates.

Prior to Tuesday Wisconsin was very much in the public eye. There were almost as many mainstream media reporters in the state as Packer fans. They were covering the results of the recall elections which, they hoped, would return control of the State House to Democrats and “fix” the problem of Governor Scott Walker’s budget control measures. Out of state union members flooded in from across the country along with $30 million of workers’ union dues to spend on the effort. National news coverage was everywhere. In the first 5 days of the story there were 53 stories on the three major   networks. Diane Sawyer, comparing the effort to the Arab Spring said, “It’s like Cairo moved to Madison.” Bob Schieffer of CBS asked Congressman Paul Ryan, “Is Madison, Wisconsin the Tunisia of American politics?” The LA Times reported on “direct mail landing in mail boxes daily, phone banks dialing, and TV ads blanketing the airwaves.” You could just feel the excitement; the unions and the Democrats were going to prevail and right this “horrible wrong” of actually balancing a budget. On the night of the elections MSNBC devoted their entire coverage to the recall results as if it were a Presidential election. They had reporters on site at various locations and were doing race by race analysis. You could just sense their anticipation as they breathlessly awaited the results with predictions that the night would be “historic.”

And that’s when it happened. The Republicans held control, the unions were defeated along with their liberal agenda and, the next morning, the entire State of Wisconsin was gone. The reporters were gone, the excitement was gone, and you would have thought the whole thing never happened. No more breathless excitement. No more anticipation. You could’ve heard a union card drop. You could actually find the results with some digging but the major networks covered the results as follows:

Scientists had some early clues to this phenomenon. It began back in February with months of major network coverage of hundreds of “protesters” breaking into the State House and doing massive amounts of damage. According to the Milwaukee Journal-Sentinel a quarter of a million dollars worth of damage was done, mainly to the majestic marble walls. Statements like this got lots of coverage: “It may lead to budget cuts in which schools will be left understaffed or lacking educational material such as books, technologies, and other provisions. School closures, a rise in teacher-to-student ratio, and the total control over the curriculum based on ideology (rather than facts) can be a possibility.” This was going to be a disaster! The bright lights of major media coverage were also shining on all of the Democrat state legislators, knowing they were now in the minority, fleeing across the state line to avoid having to cast their vote on the budget bill. There was also major coverage of the State Supreme Court battle that ultimately upheld the governor’s budget. Then, immediately after the governor signed the bill into law, the first clues that something unusual was going on began to appear. Entire school districts began vanishing.

The major media outlets simply could not find the Kaukauna School District or any of the dozens of others just like it. They could not seem to report the fact that, under the new rules, this district was going from a $450,000 deficit to a $1.5 million surplus for the upcoming year. Did they do that on the backs of the teachers and at the expense of the students? Exactly the opposite. The teachers will now have to contribute 12.6% of the cost of their health insurance instead of the previous 10%. Check your pay stub and see what you pay. They will also have to contribute 5.8% of their salary to their pension fund. Again, check and see what your employer contributes to your pension or 401K. They will also have to be on the job 40 hours a week (instead of 37) like the rest of us. These reasonable changes will save significant amounts for the district but major savings will come from finally being able to competitively bid contracts for their health insurance. Prior to the law school districts had no choice but to negotiate with one vendor for their health insurance. That vendor was…are you ready for it?……the teachers union! Now that there are actually other bidders available the teachers union has said  ‘We can match the lowest bid.'” Well, isn’t that special? If you can match the lowest bid now what were you doing to me before? It seems there might need to be an addition to the definition of “statutory rape.”

Since the district vanished, there has been no major coverage of the following from the Appleton Post Crescent:

“These impacts will allow the district to hire additional teachers (and) reduce projected class sizes,” School Board President Todd Arnoldussen wrote in a statement Monday. “In addition, time will be available for staff to identify and support students needing individual assistance through individual and small group experiences.”

The message here seems to be that you can cut major dollars out of education budgets and actually get better education. It’s not the teachers who are making too much; it’s the layers upon layers of unions and corruption that need to be stripped away.

It seems that the predictors of doom were entirely wrong but there’s no reporters around to cover the story. I wonder why that is. I heard a rumor they are all on an S.E.I.U. bus on their way to Michigan.