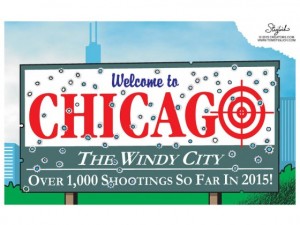 The results of the terrorist attack in Orlando – 49 shot and killed, 53 injured.

95% of the victims in Chicago were either Black or Hispanic.

Where is the outrage over this terrible loss of life that is not a rare event but one that goes on every day? Where are the Democrats wringing their hands on all the “news” shows of their lap-dog media outlets? Where’s President Obama trying to make his political points? Where’s Steven Colbert and the supposedly funny people using ridicule to try to make their political points? Why don’t the editorial pages of the liberal press churn out some of their professorial sounding nonsense about these deaths? Where are all the candlelight vigils in “solidarity with the Black community” or with the “Hispanic community?” Doesn’t anybody care about this “tragedy?”

It could have something to do with the fact that Chicago has been under the control of the Democrat Party for the last 85 years. These are their results. It could be that they do not want to draw attention to the fact that some of the strictest gun laws in the country are failing miserably. How could this be?

In the interest of human life, allow me to offer a suggestion. Maybe the Democrats running the city should enforce the laws they already have instead of wailing for more restrictions on law-abiding citizens. According to the Chicago Police Department, in the first 9 months of 2015 there were 2477 arrests on gun charges. Of those, 600 had been arrested on weapons charges before.

I have to ask…. What would passing yet another law really accomplish? Using their logic, we could crack down on repeat drunk drivers by making it impossible to buy a car.