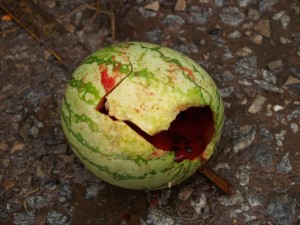 The watermelon hoax is coming apart at the seams. The green-on-the-outside, red on-the-inside “religion” disguising itself as climate science is losing its grip in both the real world and the world of information.

Solar companies are going bankrupt faster than Kim Kardashian can get divorced, scandals and kickbacks are obvious to those who will look, windmills are proving to actually require more hydrocarbon energy rather than less, ethanol is still a disaster, and the Chevy Volt and Nissan Leaf have combined to sell a total of less than 10,000 vehicles (most of those to the government). Those 6000 or so who do own a Chevy Volt are being reassured by GM (Government Motors) that they will buy back their electric Edsels should they wish to sell them back due to risk of FIRE. And last week, Canadian Environment Minister Peter Kent told reporters “Kyoto is the past,”  describing the decision by Canada’s previous Liberal government to sign on to the protocol as “one of the biggest blunders they made.”

And now, as the Durban conference on climate is holding their annual meeting of the minds, a new release of internal e-mails from the climate alarmist clique is opening even more eyes to the greatest hoax in the history of mankind. There is really not much need to comment, so below are just a few of the quotes directly from the mouths of the creators (and defenders) of the now debunked “hockey stick” temperature graph. Remember, these are the so-called “scientists” cited as the experts whose predictions on the coming disaster of global warming cannot be questioned…

From Michael Mann, the king of global warming: “I pointed out to him that we certainly don’t know the GLOBAL mean temperature anomaly very well, and nobody has ever claimed we do (this is the question he asked everyone). There is very little information at all in the Southern Hemisphere on which to base any conclusion.”

From Keith Briffa: “I believe that the recent warmth was probably matched about 1000 years ago…”

From Tom Wigley to Keith Briffa: “Why don’t you give these people the raw data? Are you hiding something — your apparent refusal to be forthcoming sure makes it look as though you are.”

From Thomas Crowley: “I am not convinced that the “truth” is always worth reaching if it is at the cost of damaged personal relationships.”

From Wigley to Mann:  “Mike, The Figure you sent is very deceptive […] there have been a number of dishonest presentations of model results by individual authors and by IPCC…”

From Jagadesh Shukla: “It is inconceivable that policymakers will be willing to make billion-and trillion-dollar decisions for adaptation to the projected regional climate change based on models that do not even describe and simulate the processes that are the building blocks of climate variability.”

Phil Jones, referring to Michael Mann: “Mike did pad his data a little at the ends and beginning to get common periods, but only by a maximum of 10 years.”

From Trevor Davies regarding an “alliance” with Goldman-Sachs:“We (Mike H) have done a modest amount of work on degree-days for G-S. They now want to extend this. They are involved in dealing in the developing energy futures market. G-S is the sort of company that we might be looking for a ‘strategic alliance’ with.”

Strategic alliances in the energy futures market? Deceptive presentations? The truth is not worth reaching? Padded data? Can’t make a conclusion on the Southern Hemisphere? Models do not describe climate variability? It’s over folks. The watermelon is in the road.