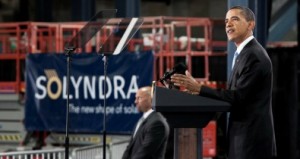 For the last couple of weeks you may have been hearing lots of stories about the failure of Solyndra, the now bankrupt solar panel company who managed to get the government to part with $535 million of your tax dollars. You will be hearing a lot more as both the election season and the story itself unfold. There will be lots of spin but here are ten facts:

1. Although you may have already heard the administration’s spin that “the loan process actually began during the Bush administration,” the loan application was denied by the Bush Department of Energy on January 9, 2009.

2. By the company’s own records they had lost $400 million over the previous three years.

3. The company’s own internal auditors had provided an opinion that the company was not viable.

4. Energy Department emails indicated that the credit rating agency predicted that Solyndra would run out of cash in September 2011. Check your calendar.

5. There was consideration given to closing the doors in January of 2010. One staffer at OMB said in an email, “If Solyndra defaults down the road the optics will arguably be worse than they would be today,” because “additional funds [will] have been put at risk, recovery may be lower and questions will be asked as to why the administration made a bad investment, not just once … but twice.” His advice was ignored and the taxpayers lost an additional $168 million.

6. One of the chief investors in Solyndra was George Kaiser, a huge campaign fundraiser for President Obama.

7. George Kaiser has visited the White House 16 times including meetings with Obama’s key advisor Valerie Jarrett, the then chief White House economist Austin Goolsbee, and Obama’s chief of staff just prior to the loan’s approval.

8. In February the loan was restructured to put Kaiser and his co-investors ahead of taxpayers in line for any assets should the company go under. (For those of you who remember, this smacks of the Chrysler takeover in which the unions were put in line ahead of preferred bond investors who, according to all previous bankruptcy law, should have been first in line for any assets).

9. Peter Lynch, a New York-based solar energy analyst, spoke to ABC news about Solyndra’s business model: “It’s very difficult to perceive a company with a model that says, well, I can build something for six dollars and sell it for three dollars. Those numbers don’t generally work. You don’t want to lose three dollars for every unit you make.”

10. The investors planned to cash out all along by offering what they knew to be nearly worthless stock to the public and leaving taxpayers holding the half a billion dollar bag. At least they would get their money. According to the Wall Street Journal,“There was a perceived halo around the loan,” said an investor with knowledge of the company. “If we get the loan, then we can definitely go public and cash out.” Solyndra actually began the process of issuing stock (cashing out) in December 2009. When it became apparent that they could get no interest from real investors they canceled the offering in June 2010.

Draw your own conclusions folks but this is just beginning.