With the election season upon us both political parties will be attempting to tell us their version of where we’ve been, why we’re in the mess we’re in, and how they plan to get us out of it. There will lots of revisionist history offered up to try to cast blame on “the other guy” while telling a believable story.

The key word is “believable.” This recurring column will attempt to set the record straight on the snake oil offerings that have been and will continue to be offered for public consumption.

Today’s episode deals with old line that goes something like “Obama is not responsible for our debt problems. He inherited a complete mess from Bush that already included massive debt and two wars that were not paid for.”

Let’s begin with the debt record of that “evil” President Bush. Even with the economic shock of 9/11 and those two “unpaid for” wars you can see below that the worst Bush deficit was in the $400 billion range and the deficits were actually coming down from 2004 until budget year 2008. What was different about that year? If you remember, in January of 2007 Nancy Pelosi became Speaker of the House and Harry Reid became Senate Majority leader of the Senate, giving total control of the Congress to the Democratic Party. The first year of their policy influence was 2008. Democrats had complete and total control of both houses of Congress from that day until January of this year. 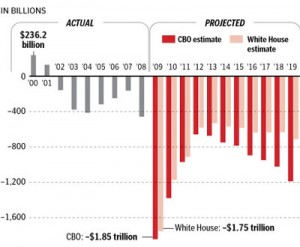 By every rational measure the health of the economy, the outrageous spending, and our debt crisis headed south with the onset of Democratic control. This is easily seen on nearly every chart of economic statistics you wish to consult:

Since taking control, the Democratic Senate has not submitted even one budget proposal.

President Obama has submitted one budget. It was so bad he could not find even one Democrat to vote for it and it was defeated in the Senate 97-0.

With a continuing string of under the radar “spending resolutions” rather than a budget they have managed to spend unbelievable amounts of money without causing outrage among the taxpayers (at least some of them).

Let’s attempt to describe the amount of debt run up by this administration. If you could have been present on the day Jesus Christ was born and began to spend $1 million per day every day until today you would still need to keep spending until the year 2238 to reach one trillion. The 2009 deficit was $1.4 trillion. The 2010 deficit was $1.3 trillion.

Campaigning in July of 2008 then candidate Obama said of President Bush (#43), “#43 added $4 trillion by his lonesome, so that we now have over $9 trillion of debt that we are going to have to pay back — $30,000 for every man, woman and child. That’s irresponsible. It’s unpatriotic.” Let’s just concede that President Bush spent too much. What was now President Obama’s response to that “unpatriotic” spending? The $9 trillion in debt he was referring to was $10.6 trillion by the time he took office. It is now $14.639 trillion – roughly $48,800 for every man, woman, and child. That’s a 38% increase President Obama has added from those “unpatriotic” levels in just two years. Think about that for a minute. In two years this President has added debt equal to 38% of all previous Presidents combined.

By the end of his term President Obama’s deficits will be fairly close to equalling those of all previous Presidents combined.

In closing, let’s explode the myth of those massive buget-crushing wars that George Bush left as a legacy. Whether you agree with the wars or not they have definable budget costs and this is where a little perspective is needed. Starting shortly after 9/11, massive amounts of money were spent on the wars in Iraq and Afghanistan in 2003, 2004, 2005, 2006, 2007, and 2008. Can you imagine how much money was spent for all those troops, all those jets, all those tanks and vehicles and hospitals for all those years? It boggles the mind how much money that must have taken.

On the other hand, President Obama, with the passage of the epic fail stimulus bill, ran up enough debt in his first ninety days to pay for the entirety of both wars for all those years. Now who, exactly, busted the budget?

In can just hear liberals out there fumbling for an answer….. “b-b-b-but what about the housing crash? That was all Bush’s fault! That’s what caused all of this in the first place.”

Stand by for Snake Oil List of Ingredients – Episode #2.