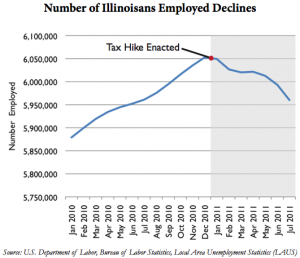 They say a picture is worth a thousand words.

The graph shown from the Illinois Policy Institute is of the number of those employed in Illinois beginning January 2010.

Illinois raised tax rates as indicated on the graph in January of 2011.

Is this what we need right now for the entire country?

With the state getting a higher tax rate but collecting taxes from 100,000 less workers do you think there is more or less money entering the state’s checkbook?