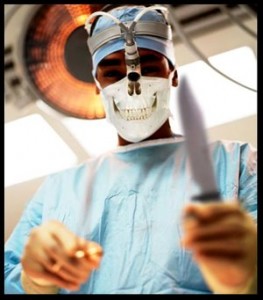 You began treatment with Dr. Obama on January 20th of 2009. As you sat in his waiting room on that day you had a fever of 104, some numbness in your legs, and you had not been able to work for three weeks running. He said your blood volume was low and this was leading to a deficiency of hemojobulin. In order to increase your blood volume (and the hemojobulin) he prescribed “stimulative transfusions.” This involved taking blood from sites all over your body and transfusing it all into your left arm.

He also put you on massive doses of “regulatin.” This drug includes custom made amounts of the wonder-enzymes EPA, NLRB, SEC, FAA, IRS, and others too numerous to name here. Dr. Obama administered a dose of regulatin whenever he felt it necessary to limit blood flow to an undesirable area of the body. For example, the oil glands, the colon (coal-un), or the free speech center in the brain.

Over the two and a half years of your treatment it became more and more obvious that this was a bad idea. At first, the treatments seemed to have some effect. Your temperature dropped from 104 to 101 and you were able to work one or two days a month. Unfortunately, things seem to have plateaued there and have not improved at all since March of 2010; the very same month he started you on Obamacaratene. As a matter of fact, some nasty complications have developed.

Although your left arm is healthier now than its ever been, the rest of your body’s hemojobulin levels have tanked so badly that your overall levels are dangerously low. Last year your blood flow got so low that you actually had to have a couple of toes amputated. The regulatin is confusing your heart signals to the point it is barely beating enough to keep you alive and the Obamacaratene has actually produced near total paralysis. Work is out of the question. You are in deep, deep trouble.

All of this has prompted you to seek several second opinions. It seems that there are two schools. Many of the doctors you’ve consulted recommend taking you off the Obamacaratene immediately and easing off the regulatin. This would be much less taxing on the heart as well as removing the confusion in the heart signals. Studies by such famous doctors as Kennedy, Reagan, and Bush have shown that in cases like this the body will actually heal itself if these harmful treatments are removed in favor of a regimen less taxing on the heart. They also suggest that you stop the so-called “stimulative transfusions” as merely moving blood from an “unfavored” location to a “favored” location (the left arm) accomplishes nothing other than to increase the doctor’s billing.

Dr. Obama and his group have told you that this is nonsense. According to them, the only reason your hemojobulin levels have not responded is that they did not remove enough blood the first time. They need to take more. They suggest that, in order to protect against the possible need to amputate any more toes, they should just amputate both feet. They have, however, promised you lifetime prosthetic benefits as part of their treatment. They insist that the regulatin is necessary even though it dangerously lowers your heart rate. Finally, they insist that the Obamacaratene is the wave of the future and that you should just learn to live with the paralysis as the “new normal.”

In a television interview yesterday regarding your now famous case, Dr. Obama again reminded everyone what a difficult case he inherited two and a half years ago. He also said those other doctors must be willing to compromise: “There are things we can do right now to help this patient. The only thing standing in the way is the refusal of those other doctors to put appearing to care about the patient before medicine.”

How could you argue with a deal like that? Remember, he’s got a no-cut contract until November 2012.